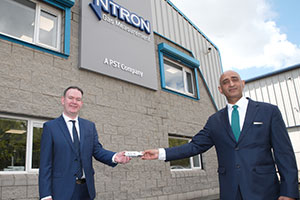 On May 26th 2021, Process Sensing Technologies (PST) oxygen division had the privilege of welcoming His Excellency Mr. Sandeep Kumar, Indian Ambassador to Ireland to their manufacturing facility in Navan, County Meath.

His Excellency and a team of high profile technical specialists from the Defence Research and Development Organisation (DRDO) came to add their support and thanks to the efforts of PST oxygen division in providing the SenzTx and range of OEM Oxygen Analyzer solutions for integration into locally manufactured oxygen generators as part of the Indian government’s response to the Covid-19 pandemic.

His Excellency Mr. Kumar viewed the capabilities of both PST’s manufacturing process and their range of oxygen analyzers for nitrogen and oxygen generators and thanked the staff for their dedication and efforts in supporting the rapid deployment of these to India. PST oxygen’s business development director David Beirne hosted and added his thanks to the staff for their efforts.

In mid-April, Indian Prime Minister Narendra Modi called for a ramping up of production of medical-grade oxygen to ensure adequate supply in the country. The DRDO is an agency under the Indian Department of Defence and have an instrumental role in tackling the advance of Covid-19 in India, which in early May, saw daily case numbers hit over 400,000.

Operating in Navan since 1987 Ntron Gas Measurement has established itself as a market leader in Oxygen Measurement across the globe. In January 2019, Ntron became a part of the Process Sensing Technologies (PST) group of companies, and in May 2019 they opened a state of the art 30,000 sq. ft. manufacturing facility. This summer, they will move into a second premises within Mullaghboy Industrial Park.